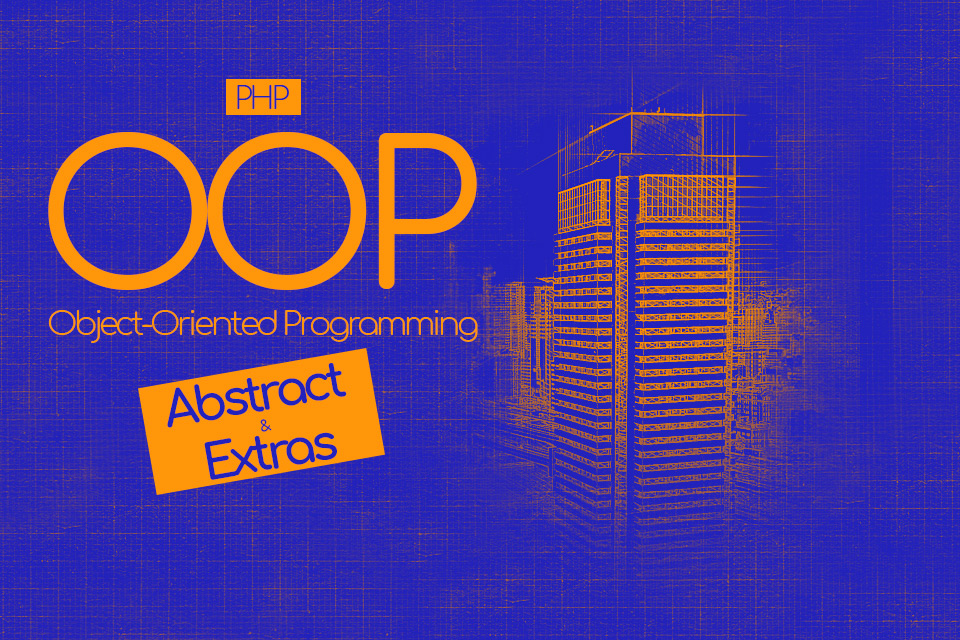 Last chapter of this series.

If you have followed up along these blog posts you are now fully capable of creating projects using the Object Oriented paradigm.

I am glad you have followed all the sections and in this part, you are going to end up what you have started.

now you will learn how to use abstract classes and several other less common feature of PHP such as reflection API and the singleton design pattern.

Keep reading and you will see that as per a lot of other web developers, myself included,  these resources will let you do that breakthrough you are looking for.

This blog post is the sixth part of  "The complete guide to Object-Oriented Programming:

Go from procedural programming to OOP expert in PHP"

Abstract classes are very similar to interfaces but they have different rules that a web developer need to be aware of.

The definition is quite straightforward, basically, an abstract class is a class that contains abstract methods,

Abstract methods are methods that have been declared but not implemented in the code.

This kind of classes cannot be constructed as an object, in fact, they need to be extended.

A ‘normal’ class that extends an abstract one must implement all methods that are inside the parent.

Something to notice is that a child class must define the abstract methods with the same or less restrictive visibility,

This means that if in the abstract class there is a protected method it can be implemented only as a public or protected.

Another rule is that the number and type or required arguments need to be the same as the parameters.

I have defined the Office class that extends the abstract class Building.

I have implemented getWindowsCount() and changed its visibility from protected to public.

There are no abstract methods within the Office class thus, I can construct an object from it.

I have added a constructor inside the abstract class so that you will be aware of the fact the parent’s constructor is called when the object is instantiated.

What is the difference between an interface and an abstract class?

Consider an interface as an empty shell.

It has only signatures of the methods, which means the methods do not have a body.

An interface does not do anything is just a pattern, a set of methods that you need to replicate.

On the other hands, abstract classes are proper classes.

Even though they look like interfaces the have some specific characteristics.

You can specify their use by what they do by a given method name.

Here is an example that highlights the differences between the two:

In here we are saying all the Building should look like this than is up to the Office class to change the functionality.

In an abstract class instead, we are saying that all the Building must have getWindowsCount().

Then we say that the method build() can be different, so we obligate the Office class to provide the implementation according to its needs.

We have almost finished here with this introduction to Object Oriented programming in PHP,

Lot’s of information has been shared and I hope you understood all of it (if not just write your question below).

However, there are a few things that have been just quickly mentioned and I would love to go deeper and give you a more wide comprehension on this topic.

Method chaining is an OOP technique that permits the programmer to perform several different but connected actions in a sequential way. “Perform connected actions” can be translated into actions related to the same object or instance of the class;

“In a sequential way” simply suggest that the methods are called one after another.

Here is an example that will clarify the concept:

All the method of the Building class have one trait in common all of them return the object itself via the use of the keyword $this,

If you need to brush up your memory I have explained what the $this keyword does in the introduction to Object-Oriented Programming.

The last command is chaining down all the methods of the class necessary in order to build up our sentence.

The outcome of the last command will look like this:

This is so easy that you can implement this to your code straight away without any problem, just be careful to return the object.

Any class must be defined before you need to use it,

forget to do so will result in an error thrown.

Autoload alongside PSR-4 standards allows you to define them when a class is required.

I am sure that I do not need to say that this is an incredibly important feature.

In PHP autoloading is done by the spl_autoload_register() that accept a function as a parameter,

This is quite out-topic and just to explain how it works in detail I will need to write another article,

so I will just give you an understandable example:

Given that the class you want to autoload is within the “classes/” path,

here is what you would do.

This is more or less what happens behind the scene of most of the PHP frameworks out there.

the second is a boolean and defines if the spl_autoload_register need to throw exceptions when the autoload_function cannot be registered,

the third parameter is boolean as well and if true it will prepend the autoloader rather then attaching it.

If an error occurred and the function was not able to find the specified class, it will throw a fatal error.

Wouldn't be great if PHP allowed the web developer to create and instantiate objects on the fly?

The release of PHP 7 included this present to the list of its features.

Notice how easy is to implement this class inline and that it can even accept parameters like a normal class.

The code in the example will output the string “a new class has been constructed in Main Street”.

The main use of an anonymous class is the case you need to extend a named class.

If, for instance, you will need to override properties or methods, instead of declaring it you can just create an in-line implementation in the same workflow you are currently having.

Reflection is a very useful feature that has been introduced with the release of PHP 5.0 and became a standard later on 5.3.

This API permits you to examine PHP elements and fetch information about them at runtime.

one of the most useful places to use reflection API is during automated testing, in specific during PHP Unit.

For example, when testing the values of private property in classes you can entree the properties via the API and then make assertion according to the test.

There are different reflection classes, each of them allows you to inspect different types of variables.

Here are some classes:

Below a quick example of how the ReflectionClass is used:

This example will output an array of all the methods available within the Building class.

The parameter passed to the ReflectionClass can be of two types, either a string with the name of the class or a true instance of the class itself.

Each of the reflection classes has few methods that allow you to retrieve different information about the element you are inspecting.

Any self-respecting web developer will encounter design patterns in its way to master the programming art sooner or later.

Those patterns are nothing more than established methods that solve problems in a predefined way.

99% of PHP framework use them in order to increase the performances and the quality of the code.

If you have never heard the words design pattern here is your shot.

I want to introduce you the easiest among them all.

We are going to use again our imaginary city, we have had several Buildings, Offices, Schools etc,

What about the city hall? the mayor needs to keep on eye on all these classes and instantiation and method and properties.

In a city, there is only one mayor and he works in only one building the city hall.

There cannot be more that one city hall in a city.

How do we add this rule in programming?

this is an implementation of the Singleton design pattern.

How does it actually work?

As you can see the visibility of the constructor is set to private it blocks the creation of the object.

In order to create an instance of the class, you need to invoke the static method getInstance().

It checks if the instance has been already created if not, it creates a new instance with the command

The result is that in this case, you are always going to have only one single cityHall in all your program.

Where to use the Singleton design pattern in a real case?

Singleton is very easy but it can also become problematic to deal with, think at this design pattern whenever you must have a single instance of a class.

and it has to be one in a really long term.

An easy implementation could be when creating a database class to connect a DB to the code, in the majority of the cases you are going to have only one database per project.

This is the perfect use for it.

The full version of "The complete guide to Object-Oriented Programming" in an all-in-one edition is available in a Kindle format on Amazon.

If you have followed all the part of this article this has been quite a journey.

You have realized the Object Oriented Programming or OOP is less difficult than it may seem from an outsider.

The reality is that as web developers we love to use jargon.

Those words can provide a headache very quickly.

just keeping on going taking a little bit at a time you will find that apply these new knowledge is not only possible but easier than you thought.

What’s the next step?

If you understood the basic concept of this article you are ready to learn about PHP frameworks,

There are plenty of them out there, and choose one of them can be overwhelming.

Below there is a really deep comparison that I wrote that compare 24 of them, you will not find anything similar elsewhere.
Guide to PHP frameworks.