Discover the whole list of changes to migrate to PHP 8 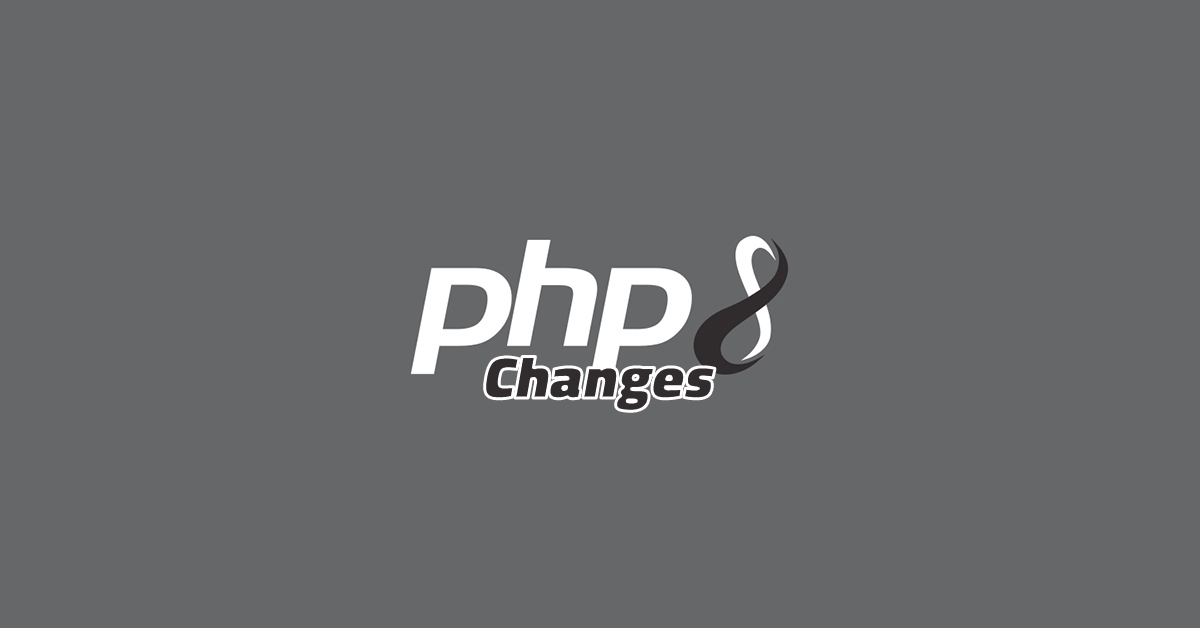 In the last couple of episodes, we went through several topics, such as what are the best addition to PHP 8 and also a deep explanation of the new features.

In this episode of the series, we will dive into the changes that will take place in the new version of the language.

Understanding changes is significant because we need to be aware of possible backwards-incompatible changes that can make or break your web application.

Also by analyzing what are the changes we can forecast where the language is going and what will happen during the years to come.

Let’s jump into it!

Two different things to explain in this section,

What is a method signature and what are reflections?

Let’s start with the first.

In programming, a method signature is a part of the method declaration.

It is the combination of the method name and the number and orders of the parameters.

In this case, the name of the function, the fact that there are 2 parameters and the X comes before Y one is all part of the method signature.

I have already written about reflection in my article about abstract classes and the extra of OOP.

But to sum-up reflection API adds the ability to introspect classes, interfaces, functions, methods and extensions.

These APIs are made of several classes and in PHP 8 the behaviour of some of them have changed.

Here is how you used to invoke the methods above for these classes.

As you can see the ‘…’ syntax for variable arguments has been added.

A little explanation here is due as well:

from PHP 5.6 onwards, the argument lists may include the ... token to specify that the function accepts a variable number of arguments.

The arguments will be passed into the given variable as an array.

You can use func_get_args() to get them.

If you use sorting function often, you might have realized that when evaluating equal elements the sorting gets unstable.

Here is what I mean:

The result, even though sorted, seems to return ‘random’ values when the elements are the same.

In PHP 8 the code will do something similar to this:

This function explicitly stores the original order of the elements and uses it as a fallback comparison criterion.

When leveraging inheritances among your OOP applications you need to be sure that attributes match the types of the variable they are supposed to be.

This was raised to a warning in PHP 7.0. because it will be upgraded to a fatal error in the future.

This is true only for classes but not for Interfaces;

Look at the example below:

The difference is that the first one comes from an interface, instead, the second example comes from a class.

A fatal error is thrown if an abstract method of the same name happens anywhere higher in the inheritance hierarchy.

The proposal and the update we are going to see in PHP 8 is to always throw a fatal error on incompatible method signatures.

One of the many differences between user-defined functions and internal functions is the way they manage some errors.

In case we pass the wrong type, our function results in a TypeError, whereas internal functions have a weird behaviour.

What they do is to throw a warning and return null.

Have a look at the examples below.

This is what we expect from a user-defined function and it works well and it is self-explanatory.

What happens if alternatively, we decide to use the core PHP function?

That could be fine until ...

Do you want to see something strange?

This is the same error but in this case, the function returns a false value instead of a null.

It happens for about 150 PHP functions.

You can easily understand that it makes it impossible to check for an error in the code if you do not know what type of variable is returned beforehand.

What this RFC proposed is to make this behaviour consistent and always return TypeError exceptions.

You can read more about this RCF in the consistent type errors official page.

Many errors in the past version of the language have an unsuitable severity level.

During the last couple of years, the developers of PHP have been trying to catch up with the latest trend in web development and unfortunately, this aspect of the language has been a bit neglected.

From PHP 8 plenty of errors have been reevaluated and they know throw error according to their level of severity.

Here are a few examples:

Do you remember me writing about the error control operator?

Well, this operator is (better say was) used to ignore any fatal errors that were generated by a PHP expression.

With PHP 8 this feature no longer works so after upgrading errors would be revealed again.

It should not be a problem because the usage of this operator is such a bad practice that nobody ever uses it.

PHP has several levels of errors that can show to us while coding.

The default level is now E_ALL.

Be careful when you upgrade because errors that were ignored before might show up.

In PHP 7.4 and below when a SQL query occurs there are no errors or warnings shown.

This except you specifically overwrites this behaviour.

This is not useful for web developers because the majority of the time they only see errors like “call to fetch() on non-object” which does not explain that the error actually is.

With this proposal in PHP 8, the new default error would be

Currently the precedence of the symbols'.', '+' and '-' operators are equal.

Which means that combinations of these operators are simply evaluated from left to right.

In some cases, this can become a big issue.

Let explain it with an example:

What you probably want here is to sum the two variables and prefix them with the string.

But since . and + have the same importance what PHP does instead is this:

And here is the problem.

In PHP 8 the concatenation symbol is now a step behind the addition and subtraction symbols.

This feature has been already deprecated in PHP 7.4,

You can see all the details in this part of last year’s article.

Here is another weird thing that happens with PHP.

If you use the % operator on an array, it will convert into the integer zero (0).

And it will be to throw a TypeError exception for an array, resources and objects.

In case of addition with two arrays, the operands will remain legal.

PHP currently treats namespaced names like Admin\Repository as a sequence of identifiers and namespace separator tokens.

Each of these kinds will be represented by a distinct token:

In PHP 8 namespaced names are treated as a single token, and as such allow reserved keywords to appear inside them.

The first reason is to decrease the backwards compatibility effect of new reserved keyword additions in future versions of PHP.

Think of the new keywords like fn or match.

The second is that by dealing with namespaced names as a single token it will avoid several syntactical vaguenesses.

The backward incompatibility is very little.

In fact, the only applications impacted are the one with code using whitespace or comments between namespace separators.

This will now produce a parse error.

Have you ever heard of the concept of numeric strings?

In PHP numeric strings are strings that can be interpreted as numbers.

A string can be categorised in four ways:

There are several problems with this, as noted in the official RFC.

Here are the main ones:

The proposal consists in consolidating the numeric string modes into a single notion.

Make it so that numeric characters are only with both leading and trailing whitespace allowed.

Any other type of string is non-numeric and will throw TypeErrors when used in a numeric context.

This will produce the following behaviors:

there will be some incompatibility issue with PHP 7.4 and below.

Like the above paragraph, we are still talking about casting numbers here.

The proposal was to create better non-strict comparisons that will guarantee less error.

The new version will do that by checking beforehand and using a number comparison only if the string is actually a numeric one.

In case the string is not the number is converted into a string, and a string comparison is performed.

The reason for this is because sometimes PHP behave weirdly while comparing different types of variable.

A famous example is:

The new update affects any operations that perform non-strict comparisons:

Even this year there have been plenty of updates to the core language, the list of changes above is a clear example.

For years PHP has been considered as a dead language and it seemed at the verge of extinction still, this programming language has given us web developers the possibility to create wonderful applications, not to mention career out of it.

These continuous updates are proof that the language IS MORE ALIVE THAT EVER and it will be one of the best choices in the back-end field for many years to come.

If, after reading about these new changes you want to brush up some basics here is the link to the first episode of the series the Basics of PHP.

If instead, you want to move on to something a bit more challenging have a look at the introduction to Composer.

Also, to be the first one to know when a new article is published do not forget TO SUBSCRIBE TO THE EMAIL LIST BELOW.

PHP 8 New Features [What you need to know]